The day started out extremely early as we wanted to be at the ferry terminal at 5am to ensure we caught the first ferry to the Sunshine Coast. We managed to get there right on time and we hoped to catch a short nap while waiting, but that didn’t quite work out. A large family group decided to hang out by our car, talking loudly and even leaning against our car. Once we got on the ferry it was smooth sailing though; we were one of the first cars on/off which meant we were easily able to make our next ferry to Saltery Bay. The trailhead was super easy to find – the first road on the right after the ferry and then a minute drive to a covered map board.

Starting out at the trailhead in Saltery Bay

We started on the trail around 12pm. Once we got on the trail, it started slowly gaining elevation. The bugs started bothering us pretty much immediately, but some bug spray got them to go away. This first section of the trail was quite nice and had a number of viewpoints of the bay on the way up.

We reached the first shelter at Rainy Day Lake a bit before 3pm. There were a number of people swimming in the lake and we grabbed lunch at the picnic table outside of the shelter.

Rainy Day Lake Shelter (and failing at using the self-timer)

We got back en route a bit after 3pm and the trail immediately got rougher. It was still in good condition, but the grade was steeper, the vegetation encroached more and the bugs started attacking again. We put on some more bug spray, but this time it barely abated the bugs’ attacks.

At this point, I was really struggling with the grade of the trail and was really wishing I’d brought my mp3 player so I could listen to a podcast and get out of my own head. Thankfully we didn’t hit snow until we were right near the summit of Mount Troubridge. There was a good metre or two at the top, but it was easily managed without spikes.

At the top, there was an emergency shelter and we were a bit confused as we thought there would be an actual cabin. We consulted the guidebook and confirmed there was supposed to be a cabin, but the written descriptions were once again less than helpful in determining where we should go. Thankfully the book also included GPS coordinates which I was able to plug into our navigation app to sort out where to go.

Getting down to the cabin was quick and thankfully downhill for the first time today. When we got to the cabin, there was already a father and his two kids making dinner. We chatted for a bit and made our dinner; they drove up close to the summit and had a shorter day than us, but they had found the trail just as rough and demoralizing as we had. For dinner, I tried out a simplified version of Skurka’s Peanut Noodles. It went pretty well, but I realized I should either use less water or drain the water before adding the peanut butter next time. It just wound up being mildly peanut-flavoured water with noodles.

After we’d finished dinner, a group of four arrived – they initially said they would set up a tent, but couldn’t find anywhere to set up in the snow, so we made room inside for them.

It was an extremely long day for us, so we tucked away into bed a bit after 9pm while everyone else stayed up and chatted. 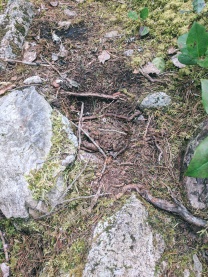 One of the viewpoints on the way up

Another viewpoint on the way up 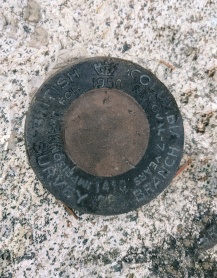 Survey marker at the top of Mount Troubridge

View all posts by natasha

#GDTplusababy
MYOG
#How to hike with a baby

Barely posted more than 9 pictures here this year, so here's a reel to recap the year instead of a #bestnine 🙃
Dude Chilling... Literally
Day 2 of our #GreatDivideTrail section D redux featured more beautiful floodplain walking, drum solos at Howse Pass, and a decision to stop short of our destination (again 😅).
The #GreatDivideTrail - so easy a toddler could do it 😉
A few more from #ElfinLakes
More photos from #ElfinLakes a few weeks back